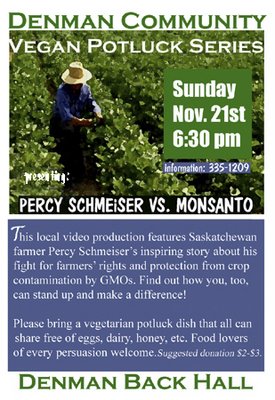 I couldn't believe how lucky we were to find out that Percy Schmeiser was not only in BC at the same time we were already planning on showing this video about him...but that he was going to be in the neighbourhood, and yes, would actually squeeze in coming on over to Denman for a personal appearance! What an inspiring man...a true Canadian hero! Percy was our first guest speaker in the renewed Denman Island Vegan Potluck Series which had been on hiatus for a number of years. The politics of food remains a central force in all our lives, and people like Percy are beacons of hope in the revolution!
Posted by Islander at 2:31 AM