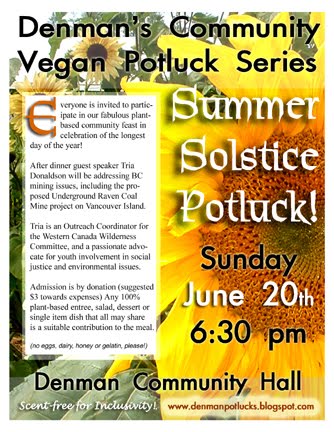 Coal on the Menu at Solstice Potluck
Denman Island environmentalists host a community vegan potluck supper four times a year, and everyone is invited to come celebrate Summer Solstice (and Father’s Day!) at the next one scheduled for Sunday June 20th. The series provides a friendly forum for food lovers of every persuasion to enjoy a healthful meal together that all may share. Any 100% plant-based entrée, salad, dessert or single item dish is a suitable contribution (also excluding dairy, honey and gelatin, please!)
Coal is indeed on the menu, as special guest speaker Tria Donaldson, Outreach Coordinator with the Western Canada Wilderness Committee is this potluck's featured guest speaker. Tria will be sharing an informative audio visual presentation after dinner on this timely topic.
“Coal is widely regarded as one of the dirtiest fossil fuels,” says Tria. “And yet here in BC we are in the midst of a massive increase in our coal mining industry, at the very same time we are claiming to be a climate leader.”
Tria will talk about climate change, coal mining, and the environmental impacts of the proposed Raven underground Coal Project. The Western Canada Wilderness Committee always has many different campaigns on the go and the lack of endangered species legislation in BC is another issue the Committee is engaged in educating the public about.
Tria is an active volunteer with several organizations, including the Canadian Centre for Policy Alternatives, the Sierra Youth Coalition and Canadian Youth Climate Coalition. She has worked on numerous social justice and environmental causes – like access to education, anti-racism, and campus sustainability. Tria is very passionate about engaging young people in social activism, and to this end she helped organize Power Shift Canada, the largest youth climate conference in Canadian history. She recently traveled to Copenhagen with the Canadian Youth Delegation for the climate talks, and was the Project Manager for goBeyond, a youth driven climate project that works with 12 post-secondary institutions in BC.
Islanders and others are invited to come on out and support Tria’s voluntary trip to Denman to share WC2’s presentation in the DI Community Hall on June 20th, as well as to ienjoy a great meal with friends, neighbours and visitors in celebration of the Summer Solstice. Dinner gets underway at 6:30 pm, and admission is by donation ($3 suggested towards expenses). There is no set time for the after dinner presentation which always gets underway whenever diners have finished their meal.
Please note thtat the potluck series is designated ‘scent-free for inclusivity’ in consideration of individuals with chemical sensitivity.The Community Hall is a short walk up the ferry hill for off islanders who park in Buckley Bay to arrive on the 6:00 pm sailing.