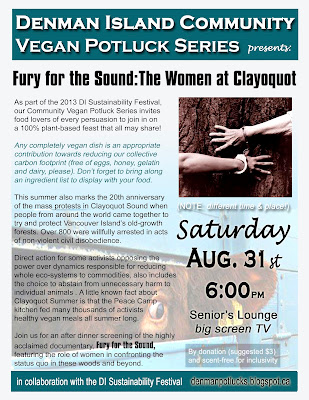 As part of the 2013 DI Sustainability Festival, our Community Vegan Potluck Series invites food lovers of every persuasion to join in on a 100% plant-based feast that all may share!

Please note that our venue will be the Senior's Lounge (across the street from the Community Hall where our potlucks are usually held), and that dinner will commence a half hour earlier than our regular potluck schedule.

Any completely vegan dish is an appropriate contribution towards reducing our collective carbon footprint (free of eggs, honey, gelatin and dairy, please). Don’t forget to bring along an ingredient list to display with your food.

It just so happens that this summer also marks the 20th anniversary of the mass protests in Clayoquot Sound when people from around the world came together to try and protect Vancouver Island’s old-growth forests. Over 800 were willfully arrested in acts of non-violent civil disobedience.

Direct action for some activists opposing the power over dynamics responsible for reducing whole eco-systems to commodities, also includes refusing to collude with unnecessary harm to individual animals. A little known fact about Clayoquot Summer (1993) is that the Peace Camp kitchen in the clear cut known as 'the Black Hole', fueled many thousands of activists with healthy vegan meals all summer long.

Plan to stay on after dinner on Saturday the 31st for a screening of the highly acclaimed documentary, Fury for the Sound (1995), featuring the role of women in confronting the status quo in the woods of Vancouver Island and beyond. Today environmental and social justice activists who work to protect the land and the vulnerable of all species continue to struggle against tremendous odds. This herstorical film provides a look at how political activism can be joined with personal empowerment.

As we face an unprecedented collapse of earth's ecosystems and the potential for runaway global warming, it has never been more crucial to recognize that protecting what remains of our precious rainforests and curbing the GHG emmissions that animal agriculture unleashes on our fragile ozone layer are related tasks.

Admission is by donation (suggested $3 towards expenses). All potluck events are scent-free for inclusivity (in respect of those with chemical sensitivities)

NOTE: The regular vegan potluck series was originally set to reconvene with our quarterly seasonal schedule around the Fall Equinox in September, but because of the 'additional' August event we have decided it makes more sense to stagger the potlucks a bit and hold the next one in October instead. Please mark you calendar for SUNDAY, OCTOBER 20th. We'll be back to our normal time of 6:30 pm in the Back Hall across the street!

Regarding sustainability, click here for a presentation by Dr. Richard Oppenlander: http://youtu.be/drS5hHdelR8
Posted by Islander at 8:07 PM