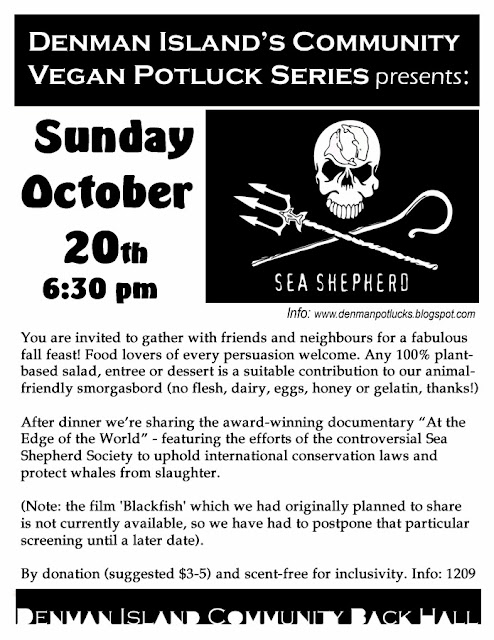 Sunday Potluck and Film - At the Edge of the Word

You are invited to gather with friends and neighbours for a fabulous fall feast this Sunday, October 20th at 6:30 pm in the Denman Backhall!

After dinner we'll be screening the award-winning documentary “At the Edge of the World” - an adventure on the high seas with the controversial Sea Shepherd Conservation Society. (Note: the film 'Blackfish' which we had originally planned to share is not currently available, so we have had to postpone that particular screening to a later date).

The real-life David and Goliath adventure featuring Sea Shepherd's 3rd Antarctic Campaign involves tracking whalers with the intentions of preventing them from violating international conservation laws. A winner of numerous awards, 'At the Edge of the World' reveals the incredible courage, determination and at times utter recklessness of undertaking such a dangerous mission.

Food lovers of every persuasion are always welcome at our community vegan potlucks, and nothing fancy is required! Any 100% plant-based salad, entree, dessert or single item dish is a suitable contribution (excluding flesh, dairy, eggs, honey or gelatin, thanks.) Please jot down an ingredient list so folks with food sensitivities can make informed choices. Our gatherings are also designated scent-free for inclusivity. Admission is by donation (suggested $3-5 towards expenses).

You can also find the Denman Community Vegan Potluck Series series on Facebook, or call 335-1209 for details.
Posted by Islander at 11:18 PM