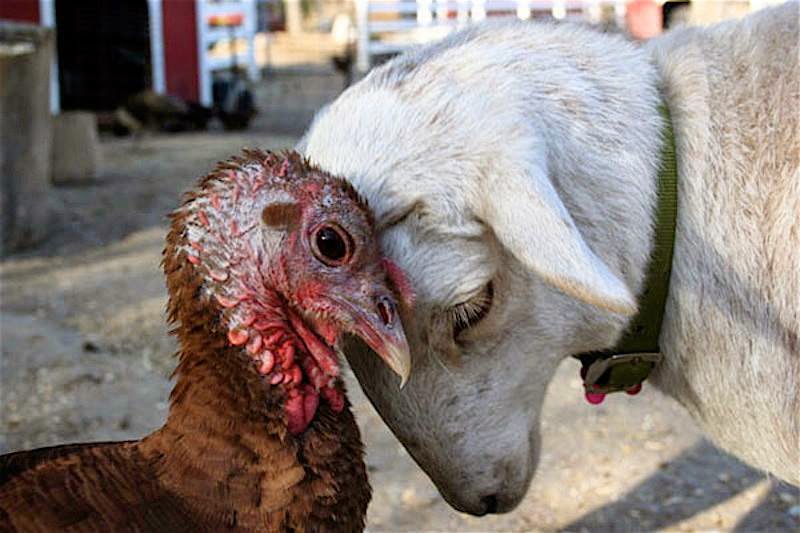 If you’ve been thinking about it, you’re not alone. More and more folks are deciding they’re no longer comfortable including the sacrifice of a bird (or any other animal) in their holiday dinner plans. The discomfort of disapproval from some friends and family is a worthwhile trade-off for the peace of mind that comes from opting out of a ritual that more often than not supports the horrors of factory farming. With at least eight farms under quarantine in the Fraser Valley right now in an attempt to squelch the spread of a particularly virulent strain of avian influenza, surely it is perfectly appropriate to raise awareness about how our collective consumer choices have led to this madness. Over 2.5 million turkeys are raised in BC each year, with approximately half consumed during the Christmas season. 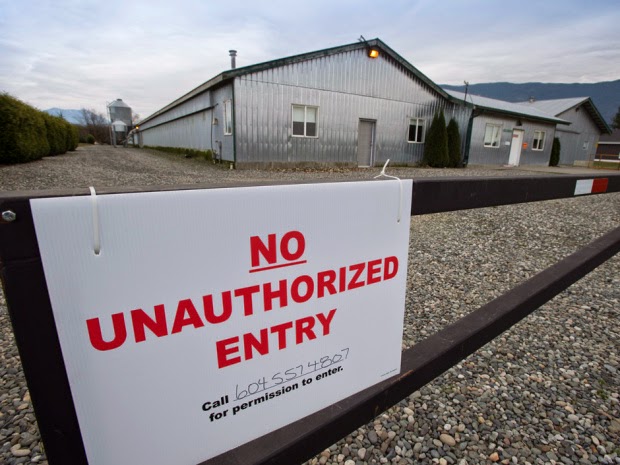 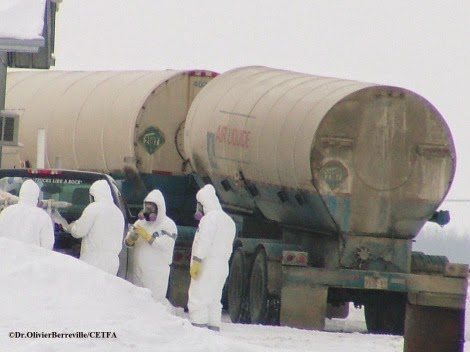 Last week in one barn alone in the Abbotsford area half of the birds had already died from the flu (thousands in just that one facility). At least 165,000 others are slated for/or have already been "euthanized" with gas - a highly controversial method of killing previously documented by CETFA (Canadians for the Ethical Treatment of Farm Animals) as involving a staggering degree of suffering. That's right, this isn't the first time drastic measures have been taken to try and contain avian flu in the area where Courtenay's Butcher's Block and other local retail outlets source the vast majority of their conventional Christmas birds. Since 2004 over 17 million birds have been destroyed on these factory farms instead of going to a slaughterhouse in preparation for the marketplace. We keep hearing that bio-security measures have been vamped up to try and prevent re-occurrence of disease outbreaks, but as Ray Nickel of the BC Poultry Association recently explained to reporters, "biosecurity is risk management, not a guarantee." To date, no one is sure how this latest flu has defied existing protocols. All we are hearing on the news is the assurance from industry spokespeople that there are “no health and safety concerns” - for consumers of the flesh of those birds already in retail outlets, or even now roasting in ovens around the province - as long as the flesh is 'properly cooked'. The immense suffering of factory farmed animals isn't even mentioned. The reality that close indoor confinement is a breeding ground for disease, or that turkeys have been horribly mutated through breeding to meet consumer demand for their flesh seem to remain taboo subjects few reporters are willing to touch. 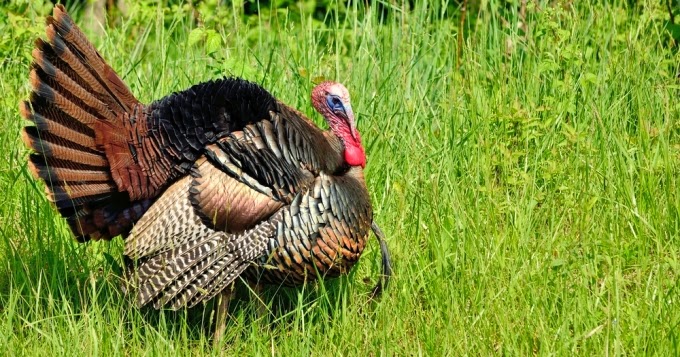 Turkeys are the only commonly farmed animal native to North America, and wild ones live in forested land where they can roost high in the trees at night, safe from predators. Unlike their domesticated counterparts they have excellent eyesight and can run up to 35 mph. Comparatively, the vast majority of turkeys raised for human consumption today can only manage a slow walk, as they have been bred to be twice the size of their wild relatives, mainly to increase breast volume for the marketplace. They can no longer fly, or even mate (they must be artificially inseminated). In nature these birds would spend up to five months- the age when most farmed turkeys are slaughtered- close to their mothers.


Supermarket turkeys labeled 'free-range' do not necessarily fare any better, as the vast majority are still raised in cramped grow-out quarters awash in ammonia. To prevent these so-called ‘free-roaming’ birds from injuring each other, a portion of their beaks and toes are routinely severed. While it is standard practice not to use anesthesia, Ian J.H. Duncan, a professor of Poultry Ethology at the University of Guelph, says, “The idea of beak trimming being a short-lived discomfort for the bird may be far from accurate.” Changes in behavior, he explains, such as a substantial decrease in activity, particularly following the first week of the operation, “suggests that the birds are suffering severe pain.”


In the wild a turkey can live from 10-12 years, but domesticated free-range birds are routinely slaughtered between 14 and 25 weeks of age. BC turkey production is concentrated in the Fraser Valley - there are around 500 poultry operations packed in to the area. Live birds are transported via multi-tiered, flat-bed trucks in crowded, tight wire cages, through all kinds of weather conditions. At the slaughterhouse, they are hung upside down by their legs to have their throats cut while still fully conscious. Lilydale in Abbotsford (one source of Butcher's Block turkeys) has been previously flagged by animal activists for particularly inhumane practises. Heavy birds hanging on the line before slaughter can suffer disjointed or broken limbs, etc.


In BC it is only legal to kill an animal raised for food yourself - rather than make sure the act is carried out by the butcher in a government inspected abattoir - if the animal’s carcass is for ‘personal use’ only, and not going to be sold to someone else. In on-line forums that discuss backyard poultry slaughter, differences of opinion abound about the most so-called ‘humane’ way to extinguish a bird’s life. Not everyone is convinced that when a bird ceases to struggle it is actually calm. Some small-scale poultry handlers believe this is more akin to the kind of ‘playing dead’ response many animals resort to once escape seems unlikely. Many agree that avoiding exposing individual birds to the ‘kill process’ prior to their own turn, is integral to stress reduction - a modicum of consideration still admittedly difficult to provide in a backyard operation, and obviously impossible on a standard slaughterhouse assembly line.


Whether or not one can afford to pay the high price for a certified organic turkey (the feed alone can cost the farmer three times as much, and the ‘finishing’ time is longer), it simply bears remembering that regardless of the 'label' attached, not all animals are necessarily raised, or slaughtered, under the kind of conditions we might imagine. Ultimately, most will meet the same end in a fear-filled environment. Even those folks who take personal responsibility for the act of extinguishing the lives of the animals they choose to eat, cannot deny the fact that death does not always come easy for those who would prefer to live.


Whenever we allow ourselves to really 'connect' with an animal, it’s impossible to deny their individual will and unique personality. If you find yourself drawn to the idea of going ‘cold turkey’ this season, it’s easy to find inspiring stories on-line about ’companion’ turkeys - birds people have allowed themselves to bond with, and been moved by to include in their circle of compassion.


There are lots of wonderful resources on the internet to assist anyone interested in eating lower on the food chain, and you’ll find all sorts of great recipe ideas on Denman’s Virtual Vegan Potluck Facebook page. If you could use some support in the new year, Denman is already home to a friendly community of happy vegans who love to share great food and recipe ideas.

If you, too, are concerned about the suffering of animals, please contact the individuals named in this important expose from CETFA, and let them know that people are watching. Thankyou. http://cetfa.org/2014/12/08/mass-suffocation-ordered-for-infected-poultry/

Good will to All Beings. -Fireweed 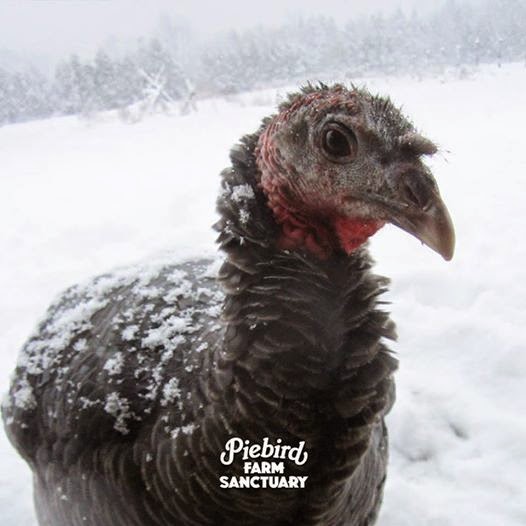